My first post in the secret group for Christian moms of transgender kids… I thank God for my tribe.

WARNING: This is early in our social transition (coming out of the closet). I still used wrong pronouns and probably said things I wouldn’t say now. But THIS is our journey and we share it with the belief that transparency changes hearts.

I thought I’d introduce myself to the group now. I’ve talked to some of you, and have been scrolling through posts wondering how I got here… And now I am going to vent because I have only just discovered safe places to vent… So if this starts looking like a book, I apologize.

I live in the ultra-conservative Pearland, TX (on the southern border of Houston)

I am here because I have an amazing child who God entrusted to me… and I am seeking guidance to make wise choices to raise him well.

Since my male child was about 18 months old he has been noticeably “girly” but he was little and people just thought he was cute. He announced at about 3 that he is a girl. Now that he is 4 we are experiencing rapid changes. He is adamant that he will not pretend to be a boy any more.

I am an ordained minister and I’ve served in the ministry/church for many years and now church is very very-very uncomfortable. The last church I served as a guest minister tried to cast demons out of my child while he was in childcare. We’ve had to leave two Christian daycare centers in six months. I will spare you the details for now. I am losing family and friends… but at least our dog still loves us.

Long-time closest friends who have done life together with me for years have avoided play-dates for the past couple of years… most likely because my very feminine male child could turn their kid that way or something (smh). But, now that I have begun talking about the elephant in the room, I feel I have no one to “do life with”. You see, I have seen their posts and opinions about Caitlin Jenner and same-sex marriage… need I say more?

A very dear friend explained how Satan is perverting my son and she is praying for him to be free. When I asked her to only pray that God’s plans and purposes for my son are fulfilled she tried explaining perhaps I am not thinking clearly. That if my son has to be this way I have to explain to him God would never make him like that and he would have to change or remain celibate to be pleasing to the lord. This is a woman I love dearly. I know her kind heart… how can she not get this (except that I don’t even get it so I should be merciful)? She knows me. Why can’t she just hear me?

I won’t ask you to tell me I am not crazy. One of my psych professors once told the class that everyone goes crazy at least once in their life… I am embracing this as my time. But, I would appreciate knowing some of y’all went crazy but were able to forgo the straight-jacket somewhere down the line.

Please pray for me however you may feel led.

*End of vent. I feel much better now. 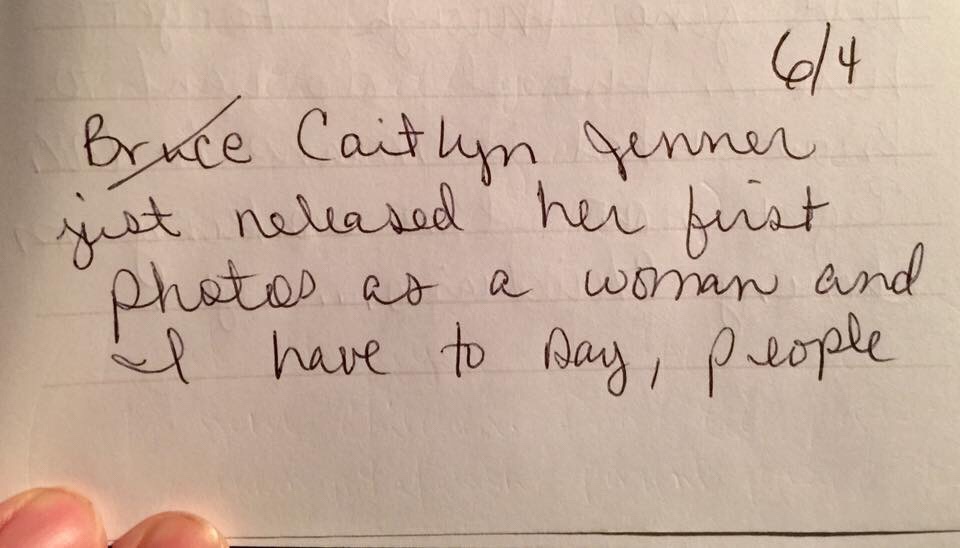 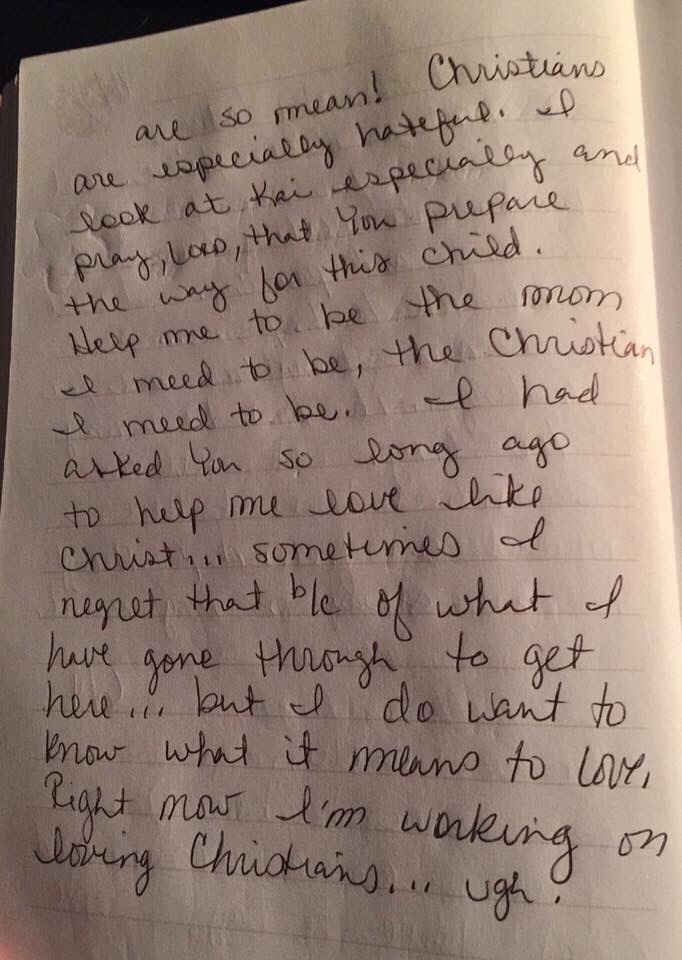 These photos are from my prayer journal. No grammar, spelling, or handwriting critics please. LOL

We were well into the process of social transition (coming out to people). Kai had already been allowed to be herself at home without punishment for quite some time. Jenner’s transition, in many ways, made it so much harder on us. Not because of her so much… but people just became less accepting and far more hateful.

9 thoughts on “Finding a tribe”